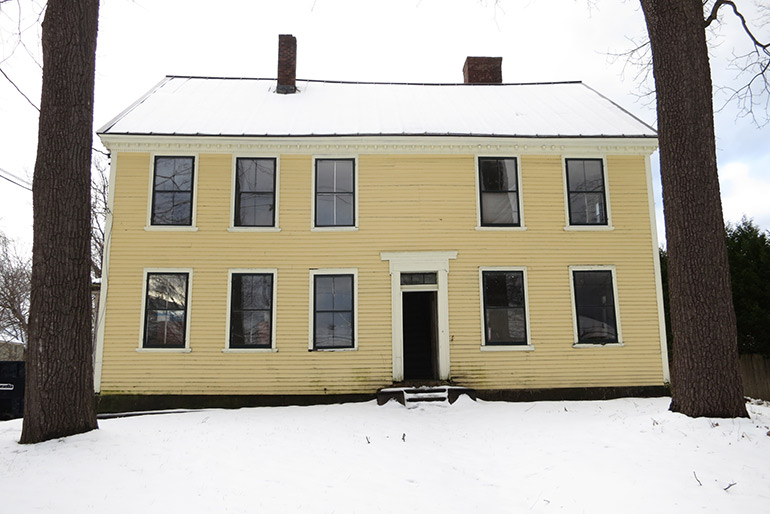 Stephen Jacob was a prominent Vermont attorney, serving in the American Revolution, appointed Vermont’s first district attorney and was one of the original signers of the state constitution. His place in history is marred by being a slave holder in direct contradiction to the state constitution (prohibiting slavery) and a subsequent legal dispute over financial support of Dinah Mason White, a slave who he dismissed after she became infirm.

The original house has been extensively altered over its 234-year lifespan and is now a 2-1/2 story gable structure parallel to State Street with two rear ells.

The south façade on State Street has three window bays to the left and two window bays to the right of the main entry door. The original center entrance stair and doorway were removed and the structure was divided into multiple apartments resulting in an asymmetrical window arrangement.

The west elevation has a Greek revival side entrance porch supported by square columns. The main body of the house has clapboard siding with simple corner boards. The compressed building cornice is seated directly on the second story window architraves. It has a dentil molding, an ovolo, and wide spaced delicate modillions supporting a projecting corona, and oddly; a beveled Greek revival cymatium.

The later Greek revival style alterations were perhaps altered again in the Colonial revival style as seen on the lower two thirds of the entablature. The Grecian style is fully expressed on the gable ends with a bed molding.

The house was converted into five apartments in the 1960’s. It is unfortunately in an advanced state of deterioration with many areas that are open to the weather. The south façade is gradually buckling inward at the second floor due to the removal of an interior stair wall that provided lateral bracing. The interiors have suffered from the addition of multiple bathrooms and neglect over a long period of time.

However, there are significant original features that remain such as the post and beam house frame, split lathe and plaster interior finishes, a Georgian mantelpiece, and Indian shutters.

The Jacob house was purchased by Historic Windsor, Inc/Preservation Education Institute in 2008. They have performed some stabilization work including installation of a standing-seam metal roof. They are exploring possibilities for adaptive reuse while retaining the original building features that remain. The organization is determined to use the rehabilitation and restoration of the house as an educational tool. The Jacob house is designated a contributing structure within the Windsor Village Historic District.

For more information please contact Judy Hayward, Executive Director, Historic Windsor, Inc, at 802-674-6752 or through their website at Preservationworks.org.