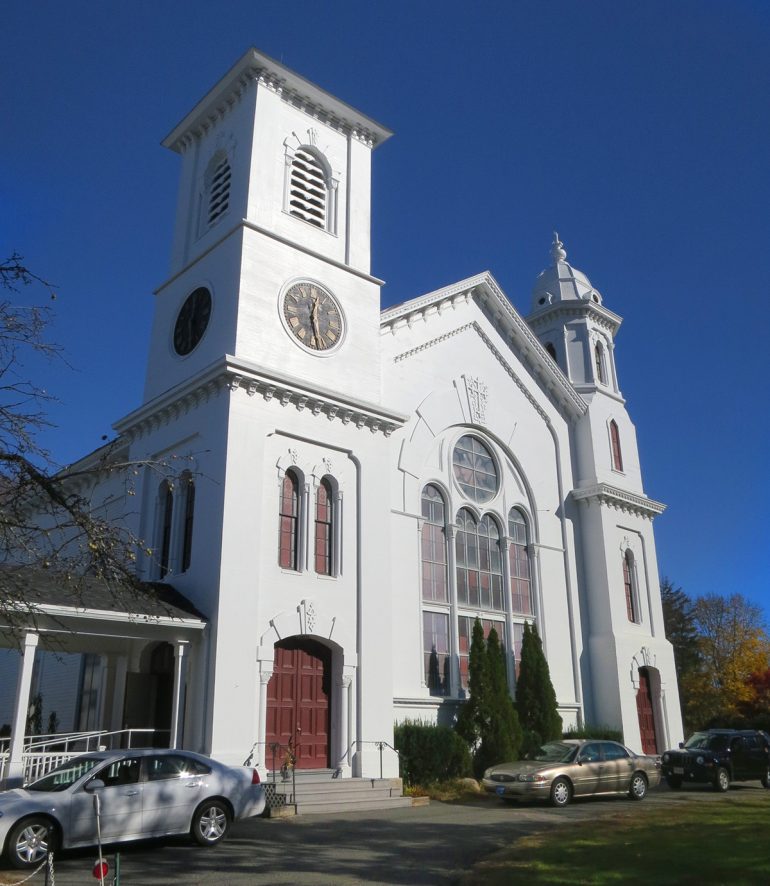 The Belleville Church meeting house was built in 1867, the third structure to be built on the site, replacing those built in 1807 and 1816 that were destroyed by fire. It is joined to the west by a breezeway built in 2009, connecting to the Fiske Memorial Chapel and parish hall; a Greek revival chapel that was built in 1848 with subsequent extensive alterations and additions.

The main church is a large wood frame gable form building fronted by asymmetrical towers at the corners, entrance doors and a large round arched window. It rests on a dressed granite foundation. It was designed in the Victorian mannerist style characterized by a combination of Gothic, Romanesque and Italianate architectural features.

Defining architectural features include rusticated round arched windows with expressed keystones and voussoirs supported by Romanesque pilasters The pediment with a dentilated cornice is embellished with floral carved modillions. The round arched side windows have Gothic label mouldings supported on fleur-de-lis imposts, a flat architrave and sill brackets. The larger west bell tower containing a clock, originally had a spire and later was truncated and capped with a hipped roof. The east tower is octagonal with a ribbed bell-shaped dome roof, oculi, capped by an urn finial.

The roof is framed with (6) timber trusses. The vaulted plaster ceiling above the sanctuary is hung by boards and arch centering from the roof trusses and intermediate rafters.

Minor displacement of structural elements was observed including at the tower post scarf joints and a diagonal brace at the first truss in from the south wall.

Plaster stress cracks were observed on the interior south wall and ceiling of the sanctuary. Plaster has detached and fallen from the wood lathe in several ceiling areas along the south wall and in one location to the northeast.

It appears from the direction of the stress cracks on the southwest ceiling and south wall that there has been movement over time of the west tower. It appears to be twisting and leaning away from the sanctuary to the southwest. The evidence of diagonal stress cracks on the south wall suggest that the wall is in tension; rotating counterclockwise in an outward direction to the west. The adjacent ceiling plaster stress cracks and areas of loss appear to be in compression caused by the left side of the south wall rotating counterclockwise inward.

The wood framing supporting the arched sanctuary ceiling is dry and structurally sound upon initial observation. The plaster is primarily stable with good adhesion to the lathe. The building structure has moved minimally over a long period of time (since 1867). Old lathe and plaster walls and ceilings develop cracks which are a typical characteristic of historic interiors. The stress cracks are primarily cosmetic.

Previous recommendations by builders and building officials for comprehensive repairs including full replacement are strongly discouraged in favor of modest repairs to stabilize areas of loss and crack repair following the Secretary of the Interior Standards for Historic Preservation.