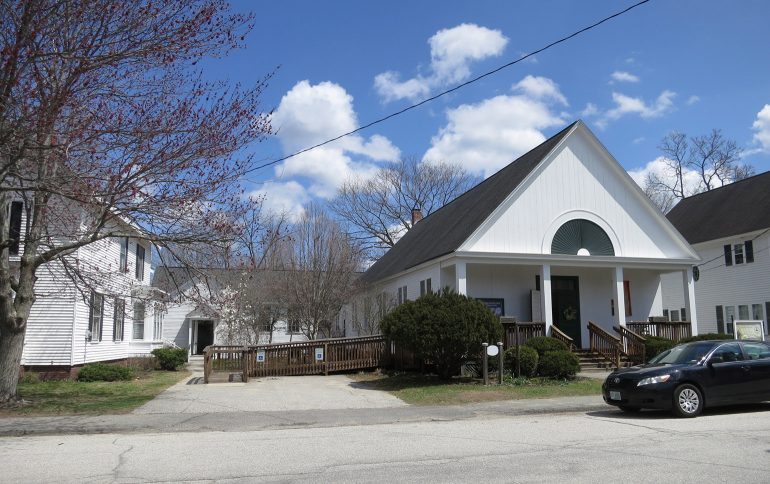 Above: The Parsonage, Community Hall and Sanctuary, from left to right.

The First Unitarian-Universalist Society of Exeter was organized in 1819 and is located on Elm Street directly across from Phillips Exeter Academy. The current sanctuary, originally named “Unity Hall,” was built during the summer and fall of 1890 on a donated site formerly occupied by a tenement house.

The tenement house was sold and moved, presumably to 1 Elm Street where it still stands today.

A 35-foot-long by 28-foot-wide addition to Unity Hall was constructed in 1895 to accommodate the church’s annual May fair celebration, and housed a kindergarten.

As church attendance and revenue declined through the 1920s and 1930s, the congregation considered repurposing and selling or replacing Unity Hall as well as the parsonage.

In 1942 the original Gothic revival church at the corner of Elm and Maple Streets was demolished. Concurrently, Unity Hall was remodeled using the salvaged building materials and furnishings to serve as the primary church with the addition of the parish hall ell.

The demolition was necessitated in part by the wartime economy and for stylistic reasons. The Gothic style was considered at the time to be an eyesore with “fancy pleats and fancy thingumbobs all over it”. The renovation of Unity Hall with an economy of purpose, established a new austere identity for the congregation; a simple economical whitewashed building complex.

With this building history in mind, the Merrimack Design Architects team is working with a limited project budget and schedule to upgrade the existing facility, addressing priority areas that were identified by the Renovation Committee: Design opportunities to improve the existing facility include increased daylighting and ventilation, creating transparency at building entry points, and developing a clear hierarchy of accessible spaces and circulation.