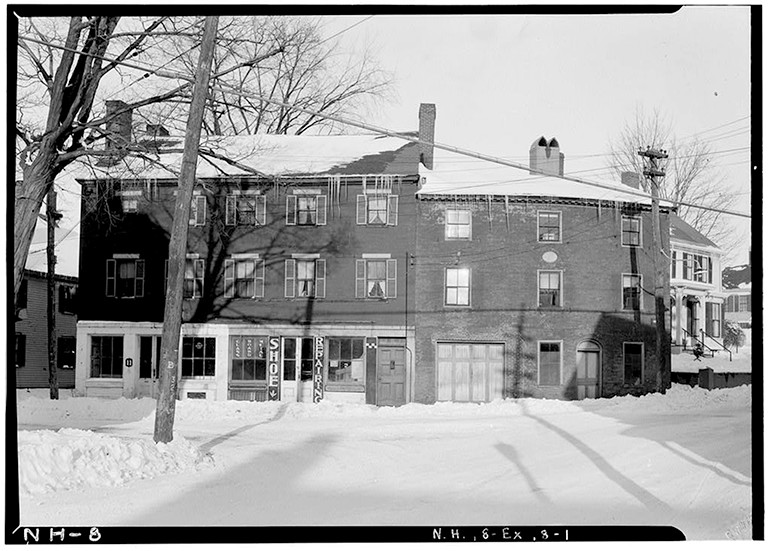 The 1816 Simeon Folsom House was purchased in August 2014 and since that time has undergone an extensive exterior restoration.

The building has a unique curved facade and was perhaps built by Jonathan Folsom (1785-1825), a Portsmouth, NH builder. The 1811 Morton-Benedict house in Portsmouth is attributed to Jonathan Folsom. It is similarly a one room deep structure and one of the earliest free-standing brick dwellings in Portsmouth, NH. Richard Irons , the restoration mason noted that many of the bricks removed and reset in the facade are marked “J.F.” ; the earliest marked bricks he has encountered.

A fragment of the original cornice was discovered beneath a rake board at the corner. The profiles were matched and run in Western red cedar by Tim Kuist of Byfield, MA. The original cornice was directly copied from of a cornice shown in Plate 26, cornice type B in Asher Benjamin’s “The American Builder’s Companion” first published in 1806. The 1934 HABS survey drawing incorrectly shows a Cymatium rather than a Cavetto. The original granite sill at the garage opening had been removed and filled with a mixture of loose dirt, asphalt and concrete. The missing sill stones were discovered when a small brick cellar window well was replaced. They had been repurposed as a larger window well and had subsequently been buried. The hand painted historic district sign by Ould Colony Artisans in Wiscasset, ME.

Circa 1870 photo of the Great Bridge with the Folsom House beyond, courtesy of the Exeter Historical Society.

On July 15th, we celebrated the 200th birthday of the Simeon Folsom House with 50 friends, colleagues and neighbors. She is decorated in her patriotic finery for the occasion. The Simeon Folsom House circa 1911, courtesy of the Exeter Historical Society